The term "open bolt" refers to the action of the weapon being held to the rear of the weapon when it is ready to fire. When the trigger is pulled on an open bolt firearm, the bolt and action slam forward which feeds a round into the magazine; the resulting energy of the shot causes the bolt to be forced backwards, ejecting the spent cartridge and completing the feeding cycle.

Open bolt firearms usually have a higher rate of fire than closed bolt weapons, as the bolt simply has to return forward in order to fire.

Open bolt weapons also do not necessarily have to be cycled when a magazine is empty, despite many games depicting them as being cycled after a magazine is emptied; there is one exception to this, however. If a fully automatic open bolt weapon were fired until it is empty and the trigger is continued to be held down even after the weapon is empty, the bolt will fly forward and stay there, at which point the bolt needs to be brought back to its rearward position in order to ready it to fire.

Open bolt weapons also only require the magazine to be removed to completely unload the weapon; closed bolt weapons require the secondary step of operating the action to eject the last round in the chamber. However, if the magazine is removed while there is still a round chambered in the barrel, the gun will discharge. To prevent this, if the open bolt gun jams, hold the bolt back while you unload the magazine. Otherwise you will have a negligent discharge.

A few examples of open bolt weapons include: 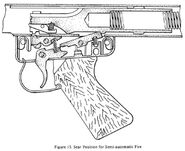