The initial design for the PDW was patented in 1989 by George Ealovega and Richard West, who had a small batch of prototypes built by the Rheinlander Instruments Corp. of Florida. This prototype version was marketed through Ealovega's company, Bushman Ltd., as the IDW (Individual Defense Weapon). The British Army expressed an interest in the IDW and took the prototypes for testing in the mid-1990s.

Parker Hale then bought the rights to the design and further developed the weapon in the late 1990s. The new version, renamed the PDW, was unveiled in 1999 and tested by the British Army. Parker Hale planned to market the weapon to military, police, and special forces units but ultimately the company went bust later that year. As a consequence, development of the PDW ceased and trials were brought to an end.

The PDW was a blowback-operated submachine gun that utilized a hydraulic regulator to moderate the rate of fire. This was electronically powered by batteries stored in the pistol grip. The regulator could be modified to give fire rates between 200 and 400 rounds per minute; disabling the regulator would cause the weapon to fire at 1,400 rounds per minute.

Parker Hale placed a high emphasis on the modifiability of the PDW; it was outfitted with Picatinny rails for detachable optics and screw-on barrel extensions of various lengths could be attached. The folding stock featured a retractable butt. A bipod could also be fitted. The standard magazine capacity was 32 rounds, although shorter 20 and 12-round magazines were available.

A British soldier with a Bushman IDW 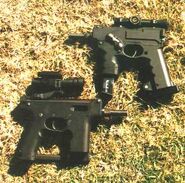 A pair of Parker Hale PDWs

The Parker Hale PDW with extended barrel and bipod

A British soldier with a Parker Hale PDW