The Pfeifer Zeliska is an Austrian large-caliber single-action revolver produced by Pfeifer Waffen. One of the largest revolvers ever made, the Zeliska is chambered in .600 Nitro Express or .458 Winchester Magnum.[1][2]

Originally designed by Austrian firearm enthusiast Adolf Zeliska (German Wikipedia) as a custom weapon (then chambered in .458 Win Mag), the weapon was manufactured by Pfeifer Waffen and later produced to order. The .600 Nitro Express version was first produced in 2001.[1]

Reloading is done via a loading gate. Parts of the weapon are gold plated, and the model name and manufacturer address are also inscribed in gold.[3][4] 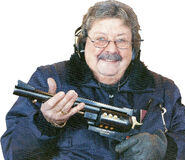 Adolf Zeliska with his revolver