The Ruger Mini-14 was first introduced in 1973 by Ruger. Designed by L. James Sullivan and William B. Ruger, the rifle employs an investment-cast, heat-treated receiver and a version of the Garand locking mechanism with a self-cleaning, short-stroke, fixed-piston gas system. The rifle's intentional operational and design similarities to the M14 are reflected by the name: it is a "Mini M14," smaller in size and chambered in a smaller round. The rifle is available in stainless or blued finish with hardwood, synthetic, or laminated stocks and an 18.5-inch barrel. Target models are currently chambered only for .223, not 5.56x45mm, and come with a 22-inch heavy barrel and either a laminated wood or Hogue overmolded synthetic stock. The Mini-14 has a classic sporter appearance in contrast to other common autoloading rifles such as the AK-47 and M16 rifle. A new for 2008 National Rifle Association model comes with a 16.25inch barrel, polymer stock, and (where legal) ships with two 20 round magazines.

The Mini-14 is similar in appearance to the M14 and M1 Carbine service rifles and is sized in between the two, and while its operating principles are most similar to the M1 Carbine, the manual of arms is more like the M14. The Mini-14 is usually referred as a substitute to the Armalite AR-15 due to its lighter weight, although it is known for being slightly less accurate than AR style rifles.

Many complaints have been lodged regarding the accuracy of this weapon, however as of 2005 Ruger re-designed the Mini-14 to include a thicker barrel and better sights which has helped with the accuracy issue. It should also be noted that at 100–200 meters a 2" inch group is not unusual with proper ammunition and bench rested for a Mini-14. While this is not sniper quality shooting it does make for a perfect hunting or general use weapon.

Ruger has made several notable variants of the Mini-14 rifle for both civilian and government customers including but not limited to:

Ranch Rifle : In 2005, Ruger reintroduced a new redesigned Mini-14. Now known as the "Ranch Rifle" it is the most basic variant Ruger offers, coming in Wood or synthetic stocks, they feature a 18.5" tappered barrel and a non-adjustable ghost ring rear sight and winged front sight.

AC-556: select-fire version, which includes a switch on the rear of the receiver to allow for fully automatic and burst fire. It came in one other variant, the AC-556K, which came equiped in a folding stock and very short 13" (330 mm) Barrel. All were fitted with bayonet lugs and flash suppressors. (Discontinued)

Mini-14/GB: Essentially a Mini-14 equipped with a bayonet lug and a flash suppressor, designed for police and government use. It was never sold directly to civilians, however, and ones that do show up for sale are police trade-ins. (Discontinued)

Mini-Thirty: Introduced in 1987 and designed with hunters in mind, it chambers the more potent 7.62x39mm round.

XGI: A larger version of the Mini-14 chambered in .308 Winchester or .243 Winchester. It was advertised in 1984-1985 but it was never produced due to continuing problems with the prototypes.

NRA edition: In 2008 the NRA contracted Ruger to develop a special edition model as a fundraiser for the 2008 presidential elections. It came in a Hogue black synthetic stock and featured a 16.25" barrel and 2 20-round magazines

Some early Mini-14 rifles were chambered in the .222 Remington cartridge. Since the .223 Remington is dimensionally equivalent to the 5.56x45mm, civilian firearms chambered in that caliber are highly restricted in countries that restrict or prohibit firearms that chamber military cartridges (such as Mexico). By chambering the Mini-14 in the similar but not interchangeable .222 Remington caliber, the Mini-14 could be sold in those countries.

In 1987, Ruger began production of the Mini-30. The Mini-30 is chambered for the Russian 7.62x39mm cartridge, used in the SKS and AK-47, as many states prohibit hunting of deer with calibers smaller than 6mm (.243"). The [[7.62x39 mm] has similar ballistics to the well-known .30-30 Winchester. The Mini-30 was only available as a Ranch Rifle, with integral scope base. Current production Mini-30's are similar to Mini-14's except for caliber.

In 2007, Ruger announced the Mini-6.8 utilizing the commercial 6.8mm Remington SPC cartridge that has been growing steadily in popularity, but was discontinued in 2012. A larger version of the Mini-14, called the XGI, was developed by Ruger in .308 Winchester and .243 Winchester, but while it was advertised in 1985, it never entered production due to continued accuracy and functioning problems. They remain in Ruger's possession. 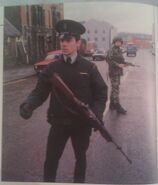 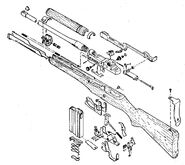 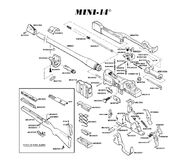 Retrieved from "https://guns.fandom.com/wiki/Ruger_Mini-14?oldid=85889"
Community content is available under CC-BY-SA unless otherwise noted.