The Volleyfire was designed to offer its users the performance of multiple projectiles in a small form factor.[1] The weapon was first showcased at the 2017 SHOT Show, where it was touted as being "compact, reliable and invoative [sic]". No release date was ever announced[2] and it was unlikely that the weapon ever entered production.

The Volleyfire was a top-break pepperbox-styled pocket pistol with six barrels in a hexagonal cluster. A button is featured in front of the barrel cluster and is used to eject spent casings from the weapon.

The weapon fires two shots with one pull of the trigger, with the firing pins repositioning themselves after each shot.[3] The weapon has been stated to be not available in .25 ACP at launch. The weapon was to be available in four colors: pink, black, ranger green and gold finger.[1]

Standard Manufacturing has trademarked the names Volleyfire and S-333.[3] 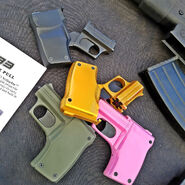 All four colors of the S-333 Volleyfire.
Add a photo to this gallery

Retrieved from "https://guns.fandom.com/wiki/S-333_Volleyfire?oldid=92964"
Community content is available under CC-BY-SA unless otherwise noted.