Following their defeat in World War I, Germany was largely prevented from manufacturing and exporting weapons, as per the terms dictated by the Treaty of Versailles. The Bergmann firm of Suhl, which had produced the MP18 submachine gun during the closing stages of the war, thus sought to find an alternate manufacturer for the weapon.

In 1920, Bergmann granted the production rights of the MP18 to SIG in Switzerland, who began manufacturing and marketing the weapon in a variety of different calibres for international sale. Finland adopted, and produced, the M1920 in 7.65×21mm and Japan adopted it in 7.63×25mm. It also saw large sales to China in this caliber. Examples seen in contemporary photos from the Sino-Japanese War are often misidentified as the MP28.

The Japanese model had special bayonet fittings; these weapons were named the Type Be (Japanese: ベ式機関短銃 Be-shiki kikan tanjū), with the "Be" being the first phonetic in "Bergmann" (Japanese: ベルグマン Beruguman).

In 1930, SIG unsuccessfully attempted to market a new model called the M1930, which featured a modified trigger, a right-hand magazine feed, and a vertical foregrip attachment. This version may have been sold in small numbers to the Mengjiang state, but otherwise it was unsuccessful.

The M1920 was a basic blowback-operated submachine gun copied directly from the MP18. The only difference in design was the straight magazine feed, as opposed to the MP18's backward-slanted magazine port, and the replacement of the MP18's fixed rear sight with an adjustable tangent sight. The M1920 generally also used a more rounded cocking knob compared to the MP18's curved handle. The M1920 did not take the 32-round "snail" magazines used by the MP18, but instead fed from more conventional 50-round double-stacked box magazines.

Cross-section diagram of the SIG M1920.

Japanese-issue Type Be with bayonet lug. 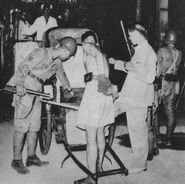 Chinese clone of the M1920 made in Tsingtao, 1927. Note the vertical magazine well.