The Sieg automatic rifle was built by Chief Gunner's Mate James Sieg of the U.S. Coast Guard while he was stationed aboard a cutter ship shortly after World War II. It was an entirely private venture with little serious consideration for meeting military standards. Only one prototype was made and it was tested at Fort Benning, to decent results. No further action was taken with the design.

The Sieg automatic rifle was a gas-operated, .30-06 rifle utilizing an unusual bullpup layout, whereupon the magazine (a modified 20-round BAR magazine) was located just behind the trigger, in place of a pistol grip. The gun used a rotating bolt and fired from a fixed hammer. The muzzle was fitted with a large 6-slot compensator which could double as a rifle grenade launcher and could accept a bayonet. The two-stage trigger, which gave single shots and fully-automatic fire, was hinged at the center rather than the top. The gun was hand-made to a reportedly high standard. 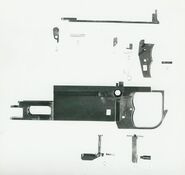 Retrieved from "https://guns.fandom.com/wiki/Sieg_automatic_rifle?oldid=81557"
Community content is available under CC-BY-SA unless otherwise noted.