The Slostin was a self-powered Gatling-type gun of Russian origin and was chambered in 7.62×54mmR, mounted on PM M1910 wheeled tripods. It used a gas-operation, with stationary breech and movable barrels. each barrel has its own gas cylinders, with piston connected to the next barrel. Upon firing one barrel, next one was forced forward, and thus caused the whole barrel block to rotate through the roller, attached to the mentioned barrel running through cam track in outer shell. The Slostin gun was tested and worked well but not adopted by the Soviet Government as they found it was overcomplicated and had no advantage over the existing PM 1910's, SG-43 Goryunov and RP-46 machine guns.

A heavy machine gun variant of the Slostin also existed, chambered in the 14.5×114mm calibre. This variant had somewhat different action and was intended as an Anti Aircraft armament of the IS-7 heavy tank, but rejected on the grounds of complexity as well as they felt it had no advantages over the DShK and KPV which could perform this role well. Only a handful of prototypes were built. 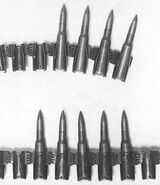 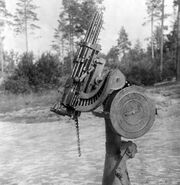