Designed in 1977, the Smerch was the work of the then-student Shevchenko. It was designed for the GRAU project code named "Modern", with the intention of designing a submachine gun, PDW, or a carbine that can be used by army specialists and special forces. A short length was one of the primary goals.

It was chambered for 5.45x39mm ammunition and had the same barrel length as the AK-74 (the weapon it was based off), while having a much shorter overall length.

Shevchenko produced either a prototype model or a mock-up, but he had no factories to mass-produce the weapon. He contacted Tula Arms Plant for production, but they rejected his proposal because they did not have room to produce anything new.

By the 1980s, the Russian army had already adopted the short-barreled AKS-74U, so Shevchenko's weapon was no longer required and was not adopted by any military forces.

The gun was gas operated with long stroke piston. It had a very short bolt carrier group and short bolt stroke distance (only half of the cartridge length) which allows it to house a full size AK-74 barrel in required dimensions. It achieved to have a compact bolt carrier group due to a unique locking system with tilting L shaped locking lugs, which are forced to lock and unlock the breech by camming surfaces in the front trunnion and on the bolt carrier. The receiver was also very short at only 85mm.

Allegedly, the short travel distance of bolt carrier group and its lightweight reciprocating parts resulted in a very high rate of fire of 1800 RPM. As it is unclear if a functional model was ever produced and tested, most information on the weapon's specs could be theoretical values. 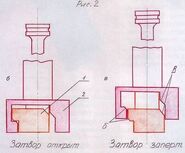 Retrieved from "https://guns.fandom.com/wiki/Smerch?oldid=91052"
Community content is available under CC-BY-SA unless otherwise noted.