The Steyr TMP (Taktische Maschinenpistole, meaning "Tactical Machine Pistol") is a compact, magazine-fed, select-fire SMG, chambered in 9×19mm Parabellum. It fires from a closed bolt, and is known for its controllability during full-auto fire.

In 2001, Steyr sold the design to Switzerland manufacturer Brügger & Thomet, who developed it into the essentially-same MP9.

The TMP is a blowback-operated, locked breech design, with a rotating barrel. When the shot is fired, the bolt and barrel move backward slightly. This causes the barrel to rotate clockwise slightly, which unlocks the bolt and allows the weapon to cycle. The rotation is controlled by a small cam pin on the barrel that follows the spiral groove inside the receiver. The charging handle is located on the rear of the weapon.

Both the upper and lower receiver are made from polymer. The TMP has no stock, which precludes the firing of the weapon from the shoulder; it can be fitted with a wire stock, however. For additional stability, the TMP has a vertical foregrip.

The safety features on this firearm include an automatic out-of-battery safety (prevents firing out of battery), a drop safety, and the manual safety switch.

The civilian variant is the Steyr SPP. It has no vertical foregrip and is semi-automatic only.

In 2001, Steyr sold the design to Swiss manufacturer Brügger & Thomet, who started producing it again under the name MP9. Its variants are the following: 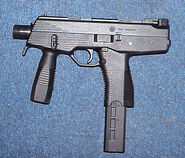 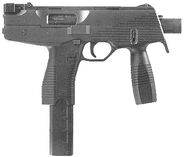 TMP from the right side
Add a photo to this gallery

Retrieved from "https://guns.fandom.com/wiki/Steyr_TMP?oldid=88539"
Community content is available under CC-BY-SA unless otherwise noted.