The Thunder is a prototype breech-loaded single shot pistol chambered in .50 BMG.[1]

The Thunder was first revealed at the 2004 SHOT show along with a few videos, produced by Triple Action, LLC of Logan, Utah. Triple Action looked for a production company to license the design to. The gun never entered mass production and Triple Action soon disappeared from the market entirely, leaving the whereabouts of the shown prototypes unknown.[2]

The Thunder is a large-caliber single shot handgun loaded through a scissor breech in the back of the gun. A massive muzzle brake mounted on the barrel provides some recoil reduction, and a patented recoil reduction design (called a "Nitrogen recoil controller") was implemented into the gun to further reduce the massive recoil.[1][3]

A small cocking lever is featured on the left side of the gun.

A lighter variant known as the Texan is known to exist, being 1.5 lbs lighter due to using porting rather than a muzzle brake.[4] 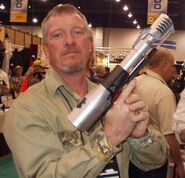 Holding the pistol, showing its size relative to a person's hands

A photo of the Thunder being fired

Retrieved from "https://guns.fandom.com/wiki/Triple_Action_Thunder?oldid=89239"
Community content is available under CC-BY-SA unless otherwise noted.