The Type 11 (Thai: ปลย.11) is a assault rifle of Thai origin, manufactured by the Thai Ministry of Defence.

The Type 11 first entered service in the Thai Army in 1968, as requested by the DEPD. The Type 11 is currently being used by some units of the Royal Thai Armed Forces and is also used for shooting practice. The Type 11 is also the rifle new military cadets receive when they are doing drills to get familiar with their rifle, according to some sources.

The Type 11 is a derivative of the Heckler & Koch HK33. As such, it is very similar to the weapon it is based on in terms of function and appearance.

A bullpup variant of the Type 11 is known to exist. It sports AR-15-styled sights and a foregrip for use in close combat warfare in jungle environments. 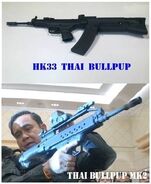