Not to be confused with Zip gun.

The USFA ZiP .22 Long Rifle, commonly known as the USFA ZiP Gun, is a .22 LR semi-automatic bullpup pistol. The pistol is made by the U.S. Fire Arms Manufacturing Company under the brand ZiPFactory. It is the only known firearm that has been produced by ZiPFactory.[1][2][3][4][5]

USFA was originally a maker of high-quality Colt Single Action Army replicas. The owner of the company, Douglas Donnelly, designed the ZiP .22 and shifted the company's focus to producing the weapon, selling all of their tooling to generate capital. However, the end weapon was plagued with a host of problems, including high unreliability, poor ergonomics, and unsafe operation. It was a commercial failure and led to the dissolution of its manufacturing company.[6]

The ZiP .22 was designed by Douglas Donnelly, owner of USFA and ZiPFactory, as an affordable and modular pistol.

The ZiP .22 was first revealed to public on June 4th, 2012, on a YouTube video titled "UFO-Unidentified Firing Object-!". The video is the only video uploaded by an account named John Smith, and claims that a shooter at a gun range appeared on the range with the pistol. The video was reported by The Firearm Blog after an individual named "Doug" emailed them about the video, and the TFB post had a comment from a user named "Doug", who praised the pistol and the video. It was believed that Douglas Donnelly enginneered the entire setup.[7][8][9]

The ZiP .22 was first officially shown in December 2012 on the ZiPFactory website, and was publicly showcased at the 2013 SHOT Show. The weapon began manufacture the same year; the weapon failed to generate any revenue for the company and was considered a failure in every regard. Manufacture is estimated to have lasted only a year, and it is estimated only a few hundred weapons were produced before ZiPFactory lost their Federal Firearms License.[6]

The USFA ZiP .22 is largely made out of polymers, with the only major metal components being the barrel, springs, guide rods, a guide plate, and the striker. The weapon's extremely small size meant that the bore axis is almost completely aligned with the shooter's hand.

The gun has no distinct grip, and users must use their index and middle finger to grip the trigger and a small loop underneath the trigger, and their palm resting on the back and their thumb wrapped around the weapon.

The weapon has no slide nor any visible bolt handle. Instead, there are two charging rods, both located directly above the muzzle. The longer rod is called the "ZiP LOAD" rod. Pushing it into the frame and releasing it will move the bolt back and chamber the first round. The shorter rod is called the "ZiP RESTRIKE" rod. Pushing it into the frame will, in theory, reset the striker but not open the action far enough to eject the chambered round. The two rods are reversible if the operator desires, since the only reason the restrike rod stops short of ejecting a round is that it is not physically long enough: both rods push on the same mechanism in the same way.[10]

An inspection port on the top of the weapon allows the user to check if the weapon is cocked or not. A hex wrench is mounted on the underside of the top cover plate and is used to disassemble the weapon, along with a recess for using the entire cover plate as a wrench to unscrew the barrel.[11]

The safety is a small button located near the trigger guard. The magazine release is a small lever located behind the magazine.[12]

The weapon is modular and allows for many customizable components from ZiPFactory to be used. The standard cover plate with fixed sights can be replaced with ZiPFactory's ZiP Ghost Rail Standard Fixed Sight (glow in the dark plastic version of the standard plate), ZiPPIC Rail (1913 Picatinny rail, mates with 8 threaded screw holes in the top of the gun for stability), ZiPNite Rail (allows Glock-compatible sights to be installed), and ZiPSBR Rail (allows the ZiP .22 to be attached to another gun. Attaching it into a rifle turns the ZiP into a Short Barreled Rifle under US law (requiring it to be NFA registered), hence the SBR name).

Other accessories include the BattleZiP Survival SBR Stock, a full rifle stock with a rail to attach the ZiP .22 on, which was never sold,[6] a Suppressor Barrel Kit (for a suppressor or other muzzle accessories), an Action Hold Back (a special block that can be used to hold down the "ZiP LOAD" rod to hold the bolt open), a Belt Clip, and a drop-in Upgrade Kit ver. 1.0.1 that fixes a few issues related to sticky mags and sticky rods.

The weapon uses Ruger 10/22 magazines. It works best with BX-1 10-round rotary magazines and has issues with using the BX-25 25-round magazine, which feeds too slowly. ZiPFactory manufactures the ZX-30 Reliability Upgrade upgrade kit that improves the spring inside the BX-25.

The ZiP .22 is noted to be very unreliable, and malfunctions extremely frequently.[13][14] The most major flaw of the weapon contributing to its poor reliability was its poorly designed bolt. The extremely small and light polymer bolt cycles very quickly, which causes aftermarket magazines to fail to feed or double-feed, only exacerbated by the weapon's lack of a feed ramp. The bolt can also often slam shut on a casing that has only partially exited the weapon, causing a stovepipe jam. The high bolt velocity also causes occasional case ruptures due to the bolt attempting to extract a case while pressure is still high enough to rupture it without the support of the chamber, causing serious jams. The lack of an extractor and an ejector means that the weapon has significant trouble with extracting and ejecting a spent casing, further contributing to firearm failure: it also means the ejection angle can vary wildly, with the weapon sometimes shoving a hot case directly into the shooter's trigger finger.[6][15]

In addition to its unreliability, the use of the two charging rods placed so close to the muzzle was very unsafe, particularly when using the restrike rod with a chambered round which has been known to cause the gun to fire without the trigger being touched. Many users also found the restrike rod was still quite capable of ejecting a chambered round either partially or entirely, with the former simply jamming the gun. It was also notably difficult and counter-intuitive to disassemble. Its ergonomics are usually considered to be awkward, particularly for shooters with large hands.[6]

A .22 Magnum single-shot/semi-auto variant (SSE standing for Single Shot Express) made by attaching a drop-in ZiPSSE Module onto the ZiP .22. Was not made available for sale before ZiPFactory lost their Federal Firearms License and their domain shut down.[16][17][18] 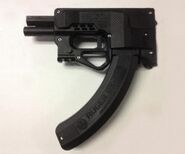 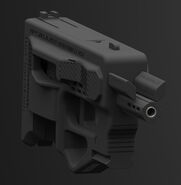 Retrieved from "https://guns.fandom.com/wiki/USFA_ZiP_.22?oldid=88561"
Community content is available under CC-BY-SA unless otherwise noted.