The Villar Perosa was originally patented on the 8th of April 1914 by Abiel Bethel Revelli, an Italian engineer. The production rights were owned by Officine di Villar Perosa, from which the weapon gained its name. Revelli had conceived the Villar Perosa as a lightweight machine gun for the Bersaglieri, capable of being transported by bicycle-mounted light infantry. It was accepted into Italian service in 1915, and production of the gun was allocated to the FIAT factory in Turin, with Beretta and Ansaldo assisting in the manufacture of some components.

Contrary to popular belief, the Villar Perosa was not actually designed to be mounted on aircraft and only about 350 were fitted to flying boats during the early stages of the war. Infantry battalions were always the main recipients of these guns. The Army fielded it as a portable machine gun for use in the Venetian Alps; the light weight and compact size of the weapon made it very easy to swiftly transport and set up in rough terrain, where traditional heavier machine guns were not suited. Initially it was used in a defensive role, but by the end of 1916 it was being deployed as an assault weapon.

The Villar Perosa was originally designed to be fired from a metal shield mount that clipped around the circular mid-section of the gun. However, troops found this mount cumbersome and it was often used without it. By 1917, a lighter and more practical bipod mount had been developed for the gun, which replaced the shield. A version of the gun with a flexible pintle was also produced, which could be fitted to an aerial mount or a tripod.

From 1917 to 1918, the Italian government contracted a Toronto-based electrics company to manufacture Villar Perosas. The Austro-Hungarians also developed two copies of the Villar Perosa; one was simply a 9×23mm conversion by Steyr, known as the Sturmpistole, and the other was independently developed by FÉG. Known as the Frommer M.17, it was constructed from two upside-down Frommer Stop machine pistols arranged on a tripod.

During World War I, the Villar Perosa was colloquially known as the Pernacchia (lit. "raspberry") by Italian troops due to the weapon's very high rate of fire.

As the war progressed, the Army began to experiment with the Villar Perosa in a variety of different roles, including as a trench-clearing weapon. It was in this role that the Army decided it was most effective, and early attempts were made to make the weapon suitable for trench combat. These included issuing the Villar Perosa on a wooden tray that the user wore around their chest via a leather strap, and wooden stocked variants that were supposed to make the weapon more ergonomic. In 1916, the Italian High Command decided to take a different approach and commissioned various firms to convert the Villar Perosa into a single-barreled infantry carbine. Three firms - Beretta, FIAT, and Gio Ansaldo - submitted entries, and it was ultimately Beretta's entry, known as the Beretta M1918, that was taken into service in early 1918.

The Villar Perosa was a delayed blowback-operated submachine gun consisting of twin receivers joined together side-by-side. Each receiver operated independently and were not mechanically interconnected; they were required to be loaded and cocked separately. The trigger mechanism consisted of a pair of spade grips with button triggers and safety latches. The magazines of the Villar Perosa featured slits in their rears that allowed the user to check how many bullets were left. Charging the weapons was done by pulling dual cranks that stuck up from the right side of each receiver; pulling those cranks pushed back on both charging handles, charging the gun in the process.

The Villar Perosa's bolt rode on a guided 50° angled lug. Upon firing, the bolt would travel forward with the lug until it reached an angle in the lug's guide, which would cause the bolt to rotate 45°, allowing the striker to move forward and make contact with the primer of the chambered bullet. The bolt would be delayed upon retraction due to the inertia it encountered when cocking the 50° angled striker travelling out of the 45° angle.

A variant of the Villar Perosa was developed specifically for the British Army, which was chambered in the standard British pistol round, .455 Webley. The weapon was taken to Britain by a marketing representative from Officine di Villar Perosa, Mr. D. Bernachi, and demonstrated at Hythe on the 7th of October 1915 and later at RSAF Enfield the same month. The Small Arms Committee filed a report on the weapon to the British Army General Headquarters, who rejected a proposal to purchase a batch of Villar Perosas. Consequently, the demonstration model was the only example in .455 to ever be produced.

An Austro-Hungarian copy of the Villar Perosa was made from 1917 to 1918, known as the Sturmpistole, made by Steyr. The most notable visual difference is its straight 9×23mm Steyr magazines instead of the curved 9mm Glisenti magazines. It appears to have been issued with the wooden tray arrangement designed for assault roles. 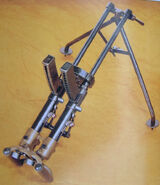 A Villar Perosa standing on its bipod.

Frontal view of the Villar Perosa.

Profile view of the Villar Perosa. 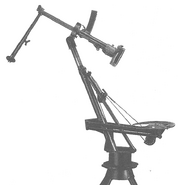 Reproduction anti-aircraft mount. Note that this is not a genuine mount for the Villar Perosa.

The Villar Perosa's grips and triggers.

Profile view of the Villar Perosa.

The Villar Perosa was originally designed to be fired from a shield mount.