The LP06 was a Malaysian prototype assault rifle that was developed by Vita Berapi.

The LP06 was designed by Vyktar Prykhodeka, a Russian residing in Malaysia. It was unveiled in 2006 and was scheduled to enter production by 2009,[1] but complications arose that prevented it from being produced.[2] Since then, there have been no further developments on this design. 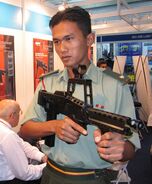 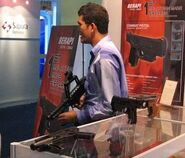 LP06 is held by the attendant. What seems to be a VB Berapi LP02 can be seen in the foreground.
Add a photo to this gallery

Retrieved from "https://guns.fandom.com/wiki/Vita_Berapi_LP06?oldid=83265"
Community content is available under CC-BY-SA unless otherwise noted.