Privatized in 1993
Accumulated by RUAG

Swiss Federal Arms Factory
Eidgenössische Waffenfabrik Bern (lit. "Federal Arms Factory Bern") was a Swiss state-owned arms factory that was established in 1875. It was responsible for designing and producing the majority of the Swiss Army's small arms arsenal during the late 19th century and early 20th century. After World War II, Waffenfabrik Bern struggled to compete with the private firm of SIG for military contracts. The company was privatized in 1993 and was reorganized into W+F Bern. It has since been absorbed into the RUAG group, and no longer produces firearms. 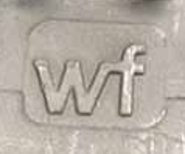 A later W+F Bern proofmark.
Add a photo to this gallery
Retrieved from "https://guns.fandom.com/wiki/W%2BF_Bern?oldid=92190"
Community content is available under CC-BY-SA unless otherwise noted.