The Walther G22 is a semi-automatic rifle chambered in the .22LR round designed by Franz Wonisch, Wulf-Heinz Pflaumer and Thomas Scheunert. It is of a bullpup layout made from Polymer, Alloys & Steel. with a spare magazine holder in the stock. 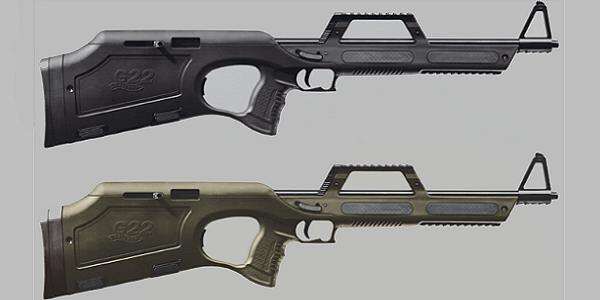 With the right ammunition, the G-22 can achieve shot groups as small as 0.25 inches (6.4 mm) at 55 yards (50 meters), and the rifle allows for a sound suppressor to be attached. From 500 feet away it is still possible to fire accurately (especially when using a telescopic sight).

Experience has shown that the G22 typically encounters feeding problems with high velocity ammunition, because the bolt assembly is not quite heavy enough, and is thrown back too vigorously, often rebounding into the casing still being ejected from the narrow ejection port. A new version of the G-22 has been released which has solved the above problems and can fire high velocity rounds without malfunction.[citation needed]

The G-22 is generally used for civilian informal practice, and it comes in two colors, Black or Green. Walther also makes a variable power 3-9 x 40 mil-dot scope which can be used to make longer-range shots. Three Weaver rail mounts are present on the G-22: the top handle scope mount, a small mount just below the muzzle intended for a Walther-produced laser sight, and a longer mount under the forend for bipods, flashlights, etc. The G-22 also has the ability to adapt a silencer.

Retrieved from "https://guns.fandom.com/wiki/Walther_G22?oldid=78201"
Community content is available under CC-BY-SA unless otherwise noted.