The XL65 LSW was a companion weapon to the XL64 IW assault rifle, with both weapons being chambered for 4.85mm ammunition. The XL65 failed for the same reasons as the XL64; NATO decided on using the 5.56 cartridge, and as a member of NATO, Britain could not adopt a 4.85mm service weapon without causing controversy. The XL65 inspired the design of the L86 LSW, which saw service in the British Army but is currently being replaced by the FN Minimi.

The XL65's design was the same as that of the XL64, but with a longer barrel, a slightly larger magazine capacity and a bipod. The lack of a quick-change barrel was a major hindrance to users, as was the limited magazine capacity, but these issues were not fixed with the L86 LSW and proved problematic when in service with the British Army. 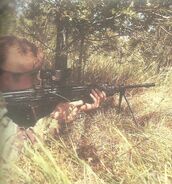 XL65 LSW in testing.
Add a photo to this gallery
Retrieved from "https://guns.fandom.com/wiki/XL65_LSW?oldid=90632"
Community content is available under CC-BY-SA unless otherwise noted.